The Camp World Of Gerwyn Davies

From wine-fuelled escapades to breaking down identity

Forget cat ears and devil horns – the costumes behind this photographer’s lens are bold, evocative, and fascinatingly abstract. Gerwyn Davies is a revolutionary artist who will be put on show when RAZZLE DAZZLE takes over the Brisbane CBD from August to November (Oh, you didn’t hear? Check out all the deets here). Ahead of his creative coup, we grabbed him for a chat to talk about his collection Subtropics, occupying the space between categories and all things camp.

Hi Gerwyn, tell us a bit about yourself…

I’m a photographic artist and costume maker. I’m currently based in Sydney, where I’m finishing my PhD at UNSW. Originally, I’m from Brisbane – I studied at the Queensland College of the Arts and lived there for many years, but I’ve been down in Sydney for about three years now.

How did your journey in photography begin?

The beginning of my photography journey was very amateur and knockabout – it involved drinking lots of white wine with my roommates on a Friday night. We would dress up in costumes, stage scenarios with sets made out of whatever we had in the house and photograph each other. That resourceful, inventive and playful process inspired me to develop my technical skills.

When did you start designing costumes?

I originally self-taught myself to make functional clothing. I wasn’t profoundly good at it and I’m still not – it requires a lot of patience! I started making costumes while I was studying photography. I would build very abstract and geometric shapes in the form of headwear and Alexander McQueen-inspired works, put them on a friend and photograph them. Eventually I wanted to grab a bit more control over the process, so I started working with self-presentation by putting myself in front of the camera and adorning my own body. I kind of married the costume-making and photography in that way. 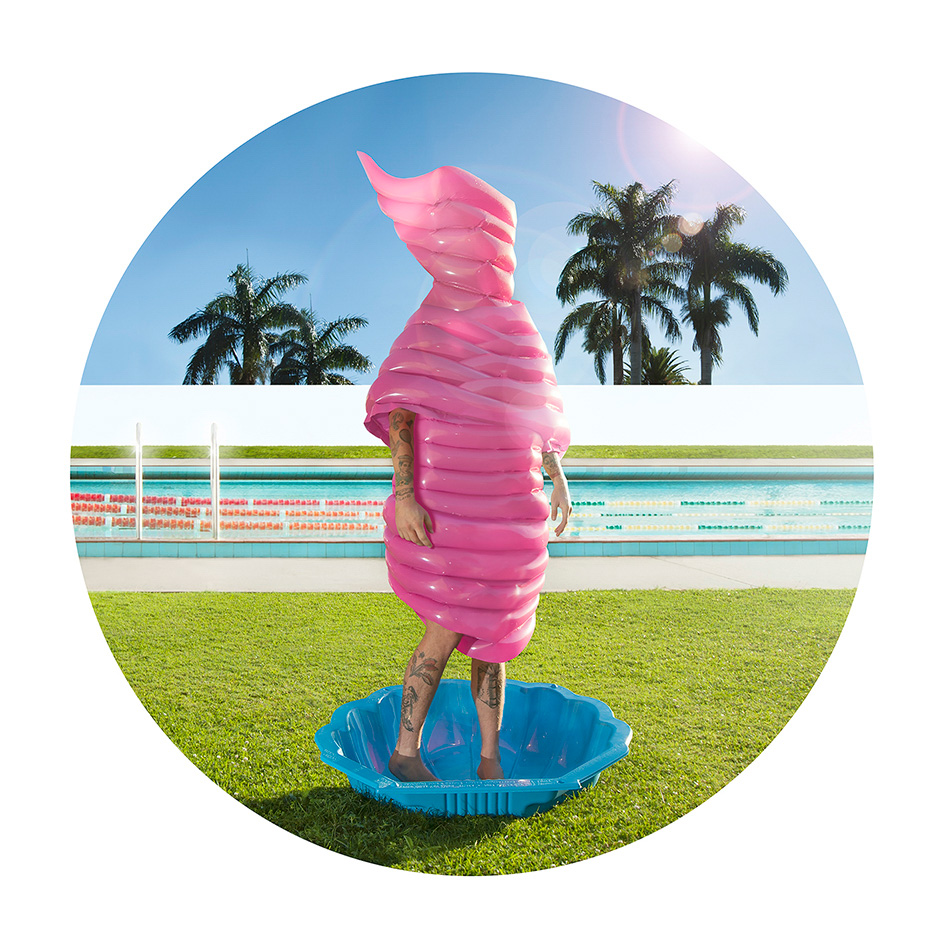 What inspires your art?

I’m very inspired by popular entertainment, like cinema, television and even advertising. I also devour music and read a lot – it’s very multi-faceted. I’m obviously very interested in fashion. In particular, designers who disobey the form of the body or work with abstraction and veiling the figure. I’m also really inspired by the materials I work with, which are mass-produced and very lowbrow – trawling through dollar stores is a very inspiring part of my process. I’m looking for objects that have a life and ask, “What else could they be?”

What influences your costumes?

My costumes are very much dictated by the materials I work with. I look at objects and focus on their characteristics, ignoring their utilitarian function. I think about how they can be pulled apart and reassembled. Because I’m performing for my own camera, I can’t see myself, which means the materials end up dictating the outcome.

Talk us through the costume making process…

It starts with trawling for a material. I don’t go in knowing what object I want to work with. I move through a warehouse of junk and be invited by things that emanate, radiate and shine. Then I go back to the studio, pull that object apart and reassemble it in various ways. I just feel my way through the process.

If I’m shooting in a studio, I’ll construct a set entirely in that space. Other times I’ll be shooting in the real world, so I think about how the body will sit in relation to an actual environment, or I shoot the space and costume separately and assemble it myself. There’s no linear path for that second part – the costume-making always initiates the process, but the photography has different approaches. Regardless of location, I’ll wear the costume, put the camera on, and stage a performance for the lens. Every now and then I’ll shuffle back and check if I’m in frame, in focus, and looking sexy in my thousand steel balls.

The work is always consolidated by the post-production process. I’ll remove elements from the image, so the photograph starts to have this really artificial and plastic sheen to it. I’m trying to suspend the viewer between is this a photo or is this a graphic? 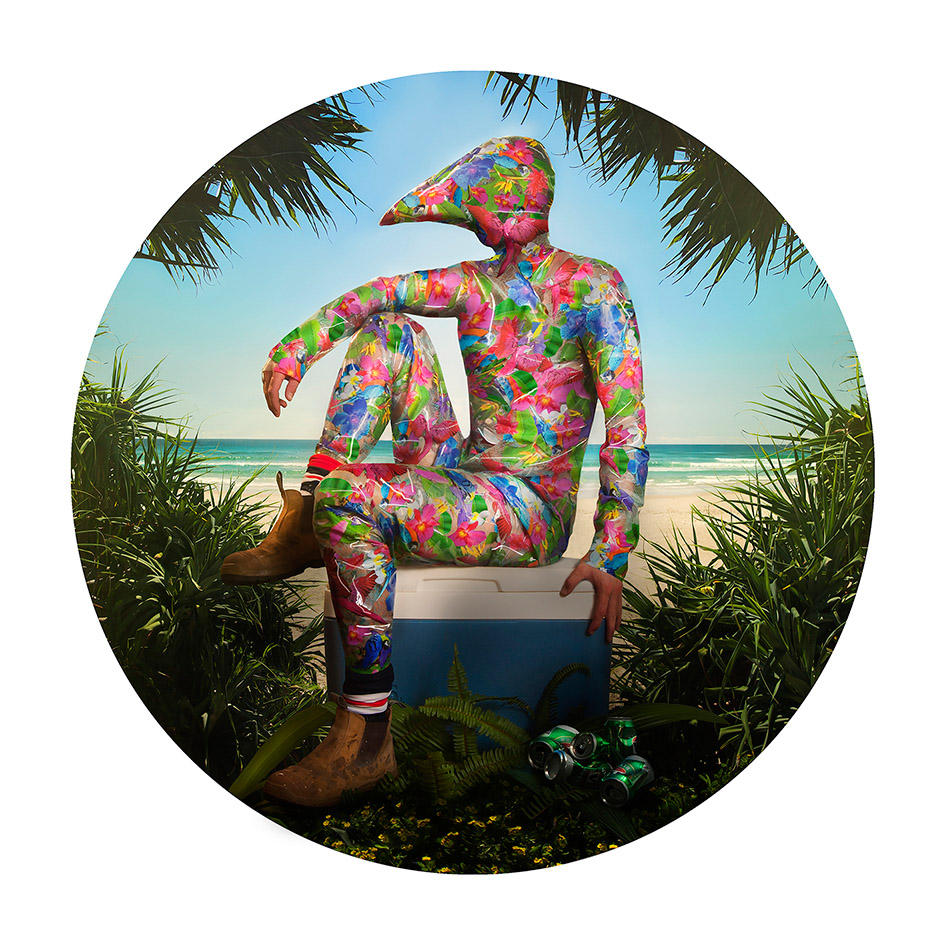 What is the meaning of identity in your work?

What does the camp aesthetic mean to you?

For me, it’s really about excesses – whether that’s material, visual or referential excesses – as well as lurid and glossy surfaces. Camp invites, but at the same time repels. It reflects light back at the viewer. The third vital component for me is the incongruity. In my images, it’s a subject but it’s also an object. It’s not human and it’s not animal. It’s occupying the confusing space in between distinct categories. On the surface, it’s ironic and playful, but camp also serves as a veil. While doing all these decorative and alluring devices, the artist is able to hide behind all of that. Where a portrait might traditionally reveal something about the sitter, by veiling yourself and covering yourself in all these camp materials, you as the subject of the image are empowered and have more control over what the viewer is allowed to see.

Tell us about your collection, Subtropics…

The collection was made in 2016 and involved working with synthetic spaces, particularly at tourist sites. Tourist sites are so heavily constructed and contrived, which is what I’m doing in the photo. I’m interested in staging and over-articulating the image. Tourist spaces do that in a very real-world context. They’re very much about facades and demarcating a place for pleasure and relaxation. The idea of having to construct and stage relaxation is incongruous, humorous and uncomfortable, so I wanted to photograph these characters in these spaces and even further accentuate this constructed aspect.

I shot a lot around the Gold Coast as it is a tourist mecca. I used post-production to remove details, making them even more accentuated and loud. The neon poodle was once in front of a famous hotel but now the hotel is gone, and the sign lives on in front of a Hooters. The big prawn is now in a Bunnings car park. Even in the afterlife, these two icons continue to serve as beacons of tourist pleasure. 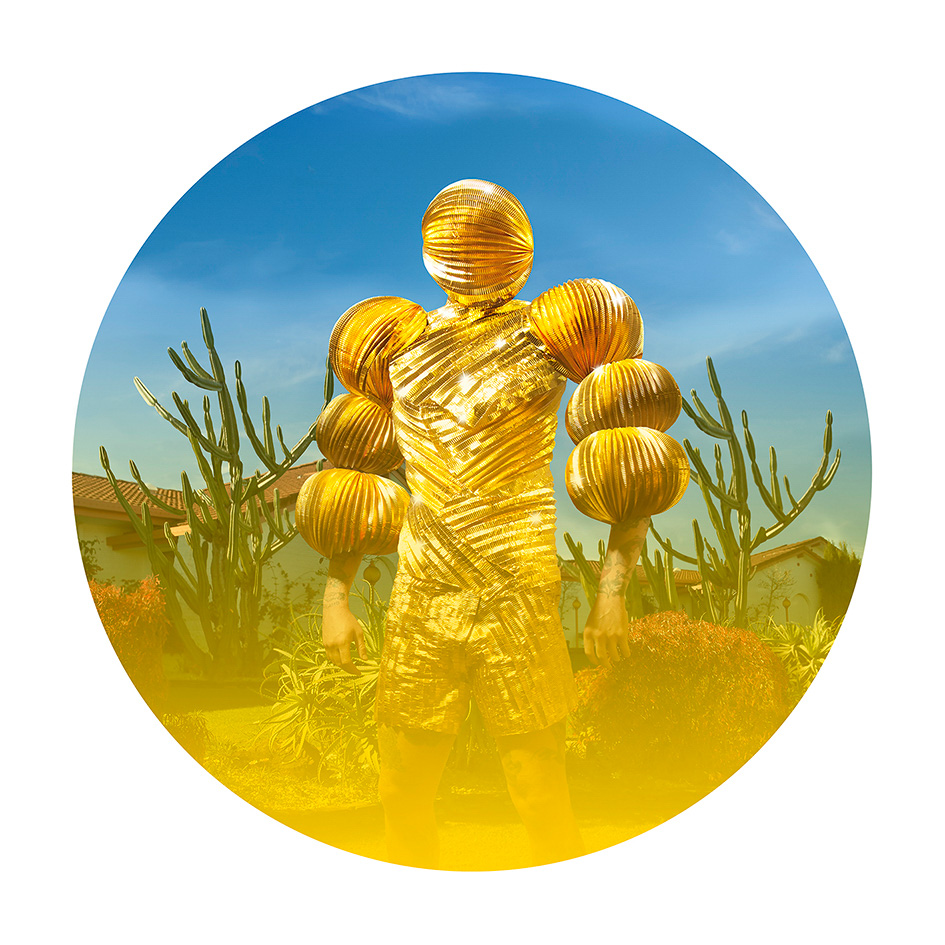 What are you excited to see at Razzle Dazzle?

It’s pretty bloody amazing! It’s a really impressive show they’ve curated and it’s amazing to have that stuff out in the public so people can shift and move amongst it. It also exposes a much larger audience to very impressive artists.

If Halloween was next week, what would you be dressing up as?

I would go as Divine – John Waters’ close compatriot who was the filthiest person in the world. I’d go as her because her face is so violent and iconic, and I believe in everything that she stood for. I think she represents a nice face for camp, which is now aligning itself with filth and decay, rather than what people traditionally think is camp, which is more Judy Garland.