The Women Kickin Goals For The Lions

With round one kicking-off (literally) in early Feb, we’ve entered the jungle to meet a few of the uncaged Brisbane Lions players. The women’s AFL league (AFLW) has turned up the heat and gained massive momentum following the 2019 season and with more eyes on the game and excitement ahead, we’re ready to follow our gals the full-way to be the Queen’s of the jungle. I mean, they are Lions after all.

We’ve plucked five from the pack to quiz them on the game, both on and off the field and the ruckus that follows.

Ps. Get ready for their first game at Hickey Park on Saturday, Feb 8! 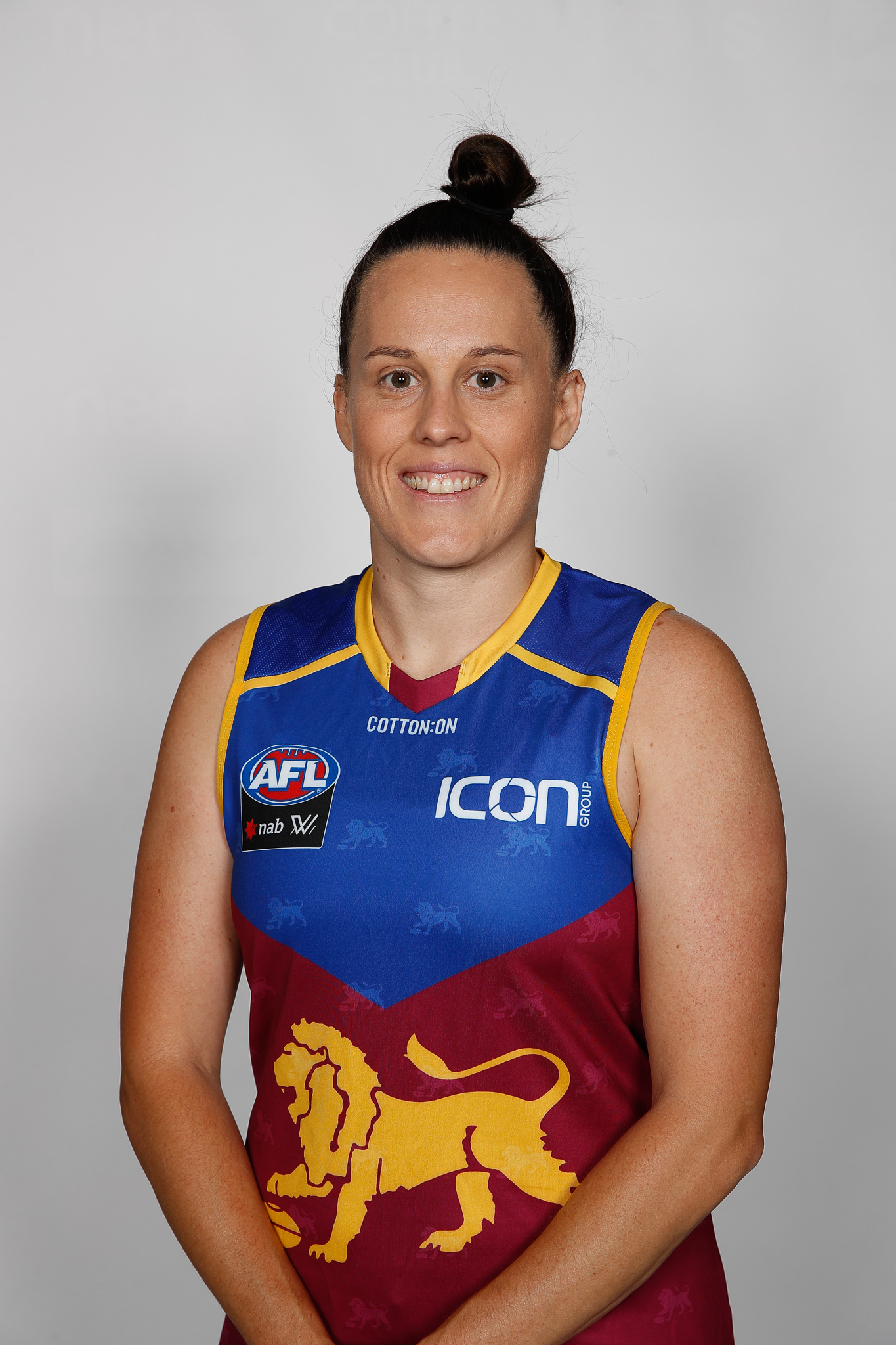 Growing-up, what did you want to be? I wanted to play for the Matilda’s!

When did you start playing? I started playing AFL in 2007 and started with the Lions in 2017

What’s been your favourite Lions moment so far? Our first ever game and win against Melbourne FC

Who do you barrack for? The Lions of course!

When you’re not kicking the footy, what do you get up to? I work fulltime as an Events Manager, but outside of work I like taking my beagle out on adventures, finding good coffee and renovating my house!
Describe the moment you were told you’d been named Captain. I was actually at work when Craig (coach) called. It was a quiet, but joyful moment.

Any advice to share with us mere mortals, Cap’n? Work hard and stay humble!

What would be your spirit animal, other than a Lion? An eagle!

Go-to pump up song? Florence And The Machine – Spectrum

Pre-game routine? Get strapped, massaged, listen to pump up tunes and put zome Zinc on!

In three words, how would you describe Dakota Davidson? Loud, energetic, class clown. 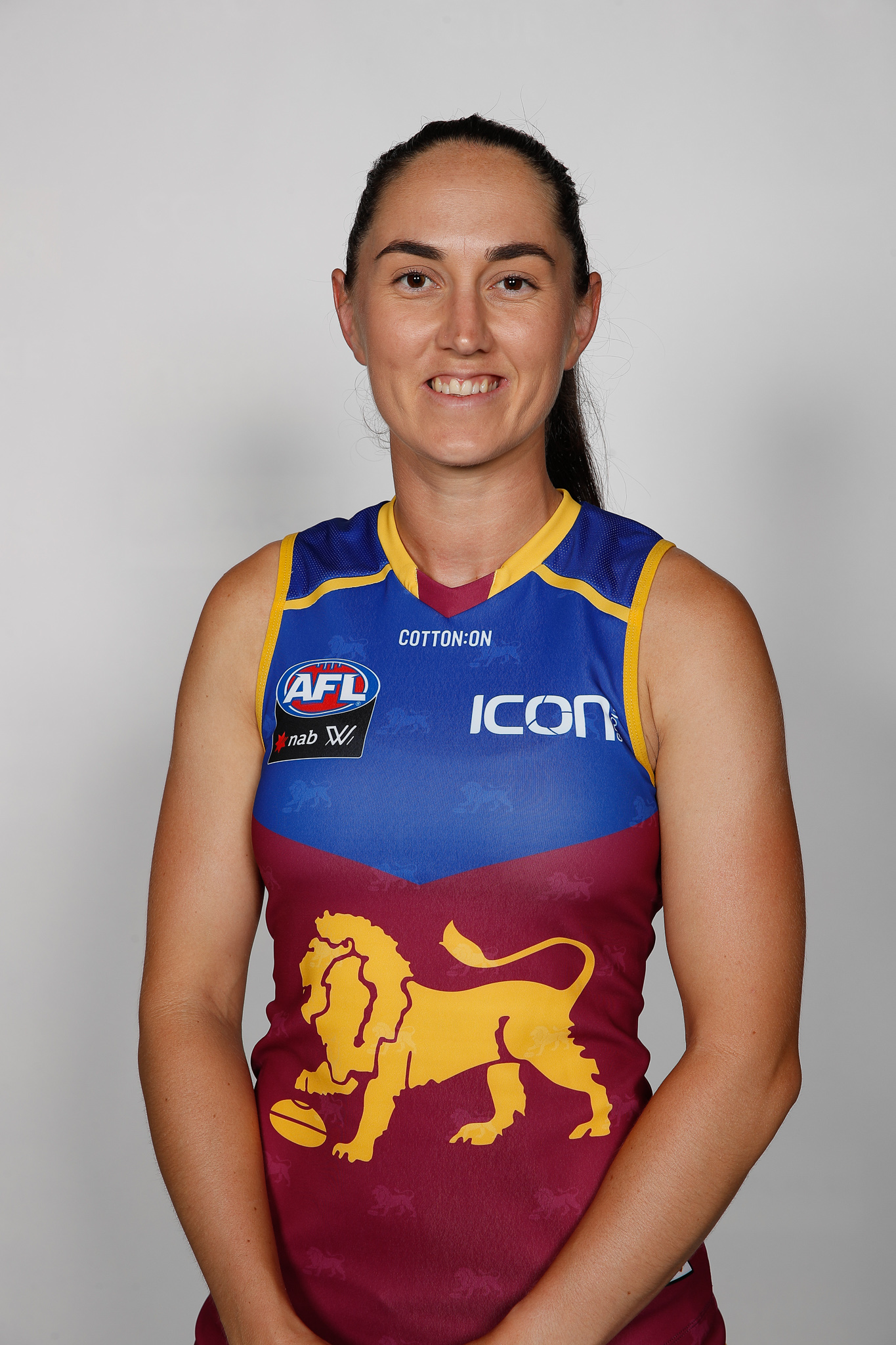 Position: Back line as a winger

Nicknames: Woofa and Brucey
Growing-up, what did you want to be? I wanted to be an Olympian or a school teacher. I am now a school teacher and at the highest level in my sport, so, pretty close!

When did you start playing? Started at my first club when I was 15 (2006) and am an inaugural player in the AFLW, so have played every season since the beginning – 2017.

What’s been your favourite Lions moment so far? Probably our first win at Casey Fields in Melbourne against The Demons. They were the worst football conditions you could imagine (rain, wind, storming). That was our first round and first win.

Who do you barrack for? The Brisbane Lions, obviously! But growing up I may have had a soft spot for the ‘Pies.

When you’re not kicking the footy, what do you get up to? I’m a fulltime school teacher, so that keeps me busy. In my downtime I go to nurseries – I’m a bit of a crazy plant lady. I also enjoy doing puzzles, reading and hanging out with my husband Andrew.
Describe the moment you were told you’d been named Vice Captain. I was informed before the whole playing group by our Coach, Craig. I was very honored and proud. It’s a great feeling being trusted and respected by your peers.

What’s been your biggest challenge so far in your football career? Definitely finding a balance between dual careers as an athlete and teacher.

Best heckle you’ve ever heard: A good one I’ve heard from someone on the mark was ‘your mum makes an average lasagna!’ haha. So random!

What would be your spirit animal, other than a Lion? Probably a dog – they just live the dream!

Go-to pump up song: I’m all about a good shuffle. I don’t mind what’s on as long as it’s high tempo.

Pre-game routine? I like to pack all my gear the night before so I’m not rushing to find things in the morning. I normally get a coffee, light walk and then chill-out and do some word puzzles to keep my mind off the game until we arrive at the ground.

Who would play you in a movie? Maybe Gal Godot if she could do a bogan Aussie accent (highly unlikely) haha.

In three words, how would you describe Ally Anderson? Happy, caring, dedicated. 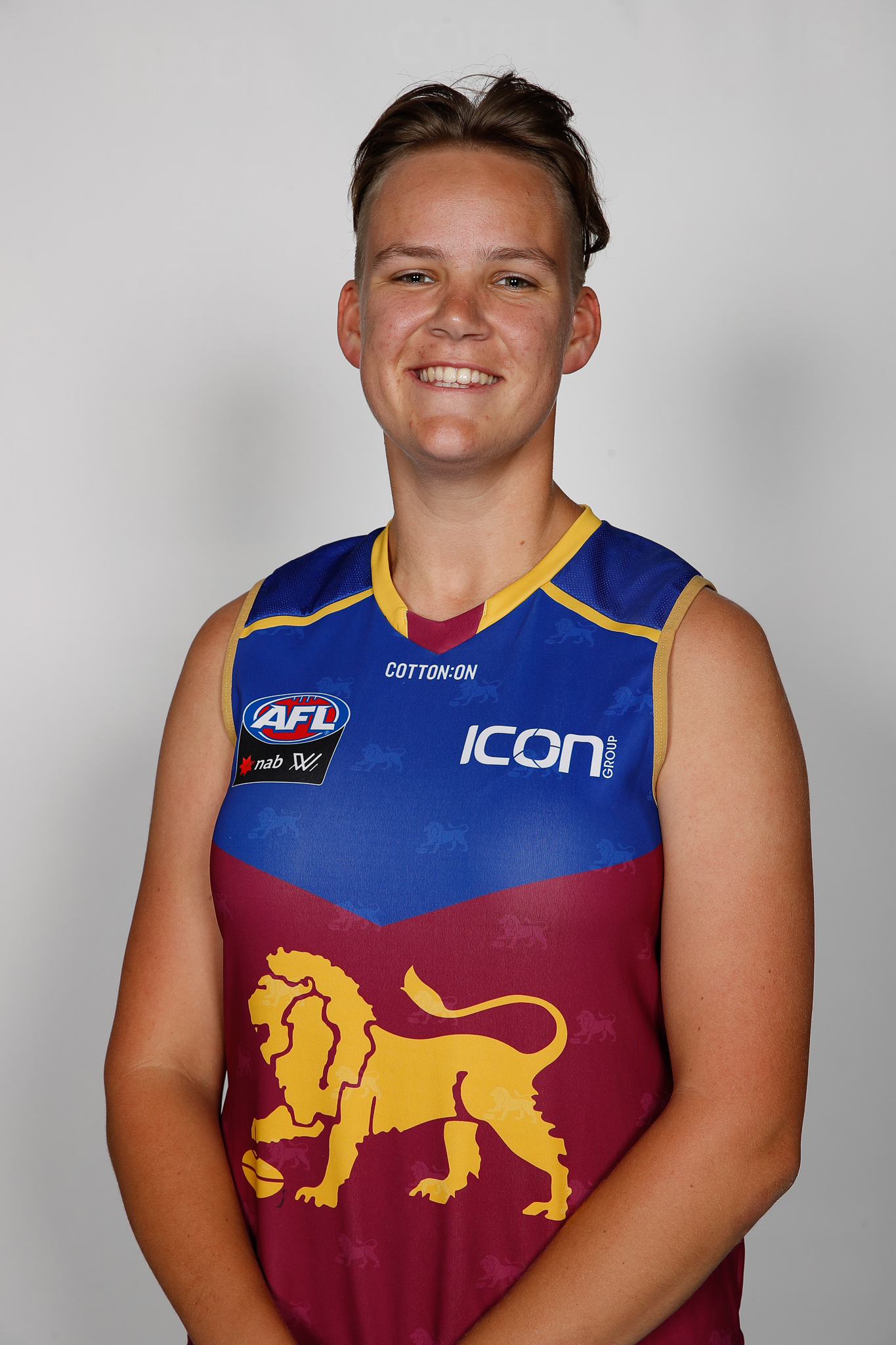 Growing-up, what did you want to be? A knight in shining armor

When did you start playing? In 2017 with University of QLD and then Lions since 2019

Who do you barrack for? I’ve been a Richmond Tigers supported for 21 years but also a Lions fan girl.

When you’re not kicking the footy, what do you get up to? Shopping, catching-up with friends, cleaning my room, seeing my dog/family, going to the beach.

What did your mum say when you were told you’d been drafted? Mum was stoked, dad was stoked, but then finished off with ‘’right, get up those hills’’. My family are very supportive of my football career but also taught me to always remain humble and remember where I come from; they keep me grounded.

What would be your spirit animal, other than a Lion? Great Dane – big and strong, but soft in the centre – a real gentle giant.

Go-to pump up song? Thundamentals – everyone but you and Of Monsters and Men – Mountain Sound

Pre-game routine? Before every game I call dad and ask him what he wants me to do in the game. What he says I then write on my wrist so he is with me.

You’re ordering a drink at a bar, what do you have? Sailor Jerry’s and dry, or a Canadian Club and dry. Or, if I’m feeling extra crazy, a water with ice in a tall glass.

You’re at a party, where would we find you? On the dance floor, absolutely killing it with my moves.

In three words, how would you describe Sharni Webb? Loyal, approachable, humble. 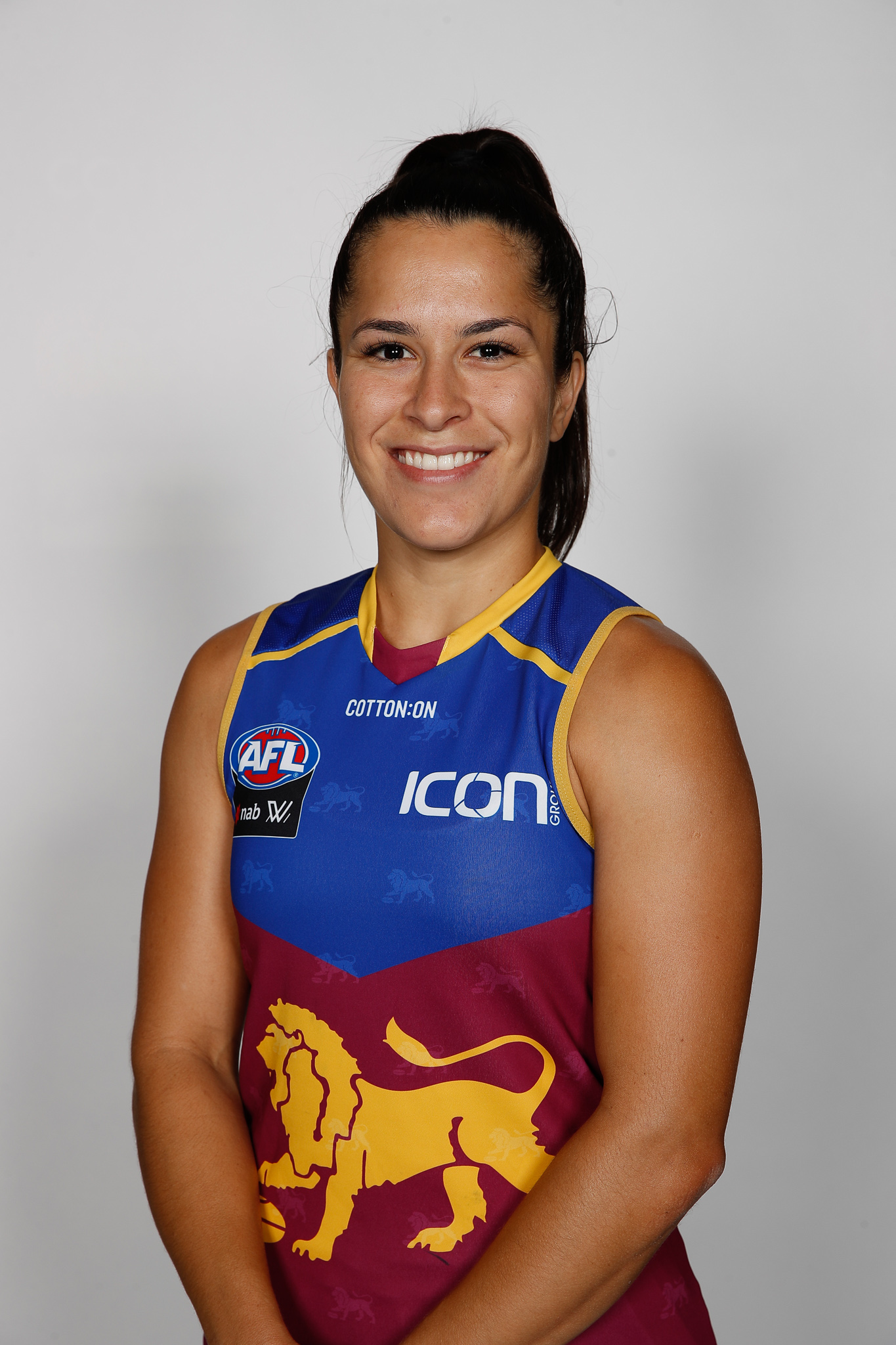 Growing-up, what did you want to be? A vet

Who do you barrack for? Brisbane Lions, of course!

When you’re not kicking the footy, what do you get up to? I love reading, brunching, Netflix and travelling!

What’s been your biggest challenge so far in your football career? This pre-season has been the toughest for me. I had surgery on my foot five months ago and still trying to get back to where I was last season in my fitness and confidence.

What did your mum say when you were told you’d been drafted? She was very proud. I can’t remember exactly, but both mum and dad are my biggest supporters and follow all around Australia to watch me play!

What’s your spirit animal? Sloth – I can sit in bed watching TV all day and be content with doing nothing! Haha

Go-to pump up song? All I do Is Win by DJ Khaled and Fergalicious (by Fergie) is always playing in the change rooms before a game!

Pre-game routine? Take my dog for a walk, eat a banana on toast and when I get to the ground, I quickly get ready so I feel prepared and can warm-up early.

What’s your favourite coffee spot in Bris? I’m a North-sider, so The Soul Pantry in Stafford!

In three words, how would you describe Jesse Wardlaw? Swag, caring, easy-going. 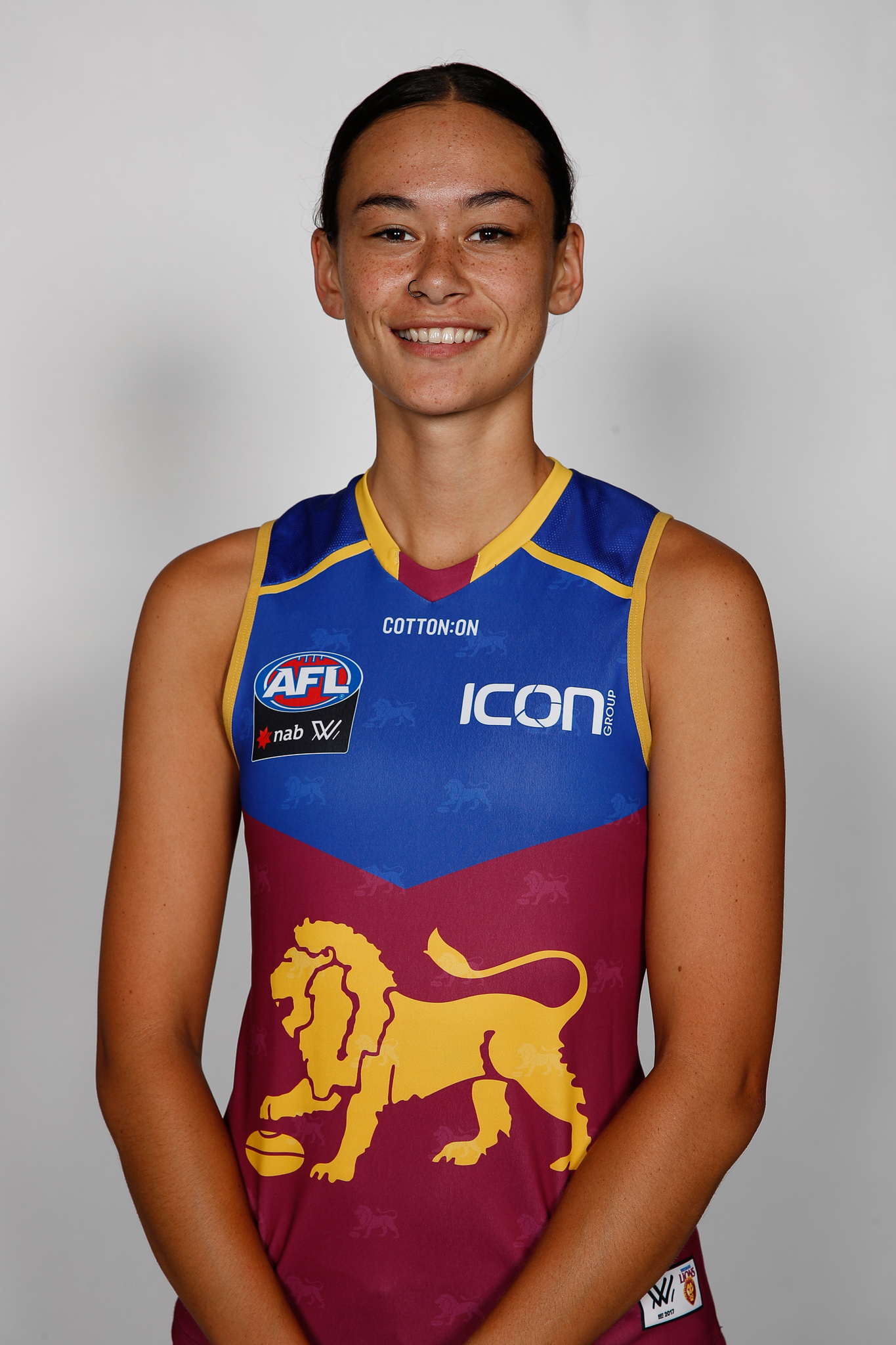 Growing-up, what did you want to be? Professional netball player

When did you start playing? I started playing in year 11 at school which was five years ago and was drafted in 2018 for the Lions.

Who do you barrack for? Go the Lions!

When you’re not kicking the footy, what do you get up to? I love going to the beach, being in the sun, skateboarding and listening to music.

What’s been the highlight of your football career? Footy trip

Have you got a hidden talent to tell us? I can solve a Rubik’s Cube in 40 seconds

In three words, how would you describe Emma Zielke? Thinks she’s funny.